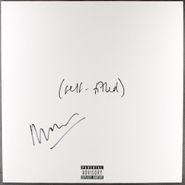 This is a NEW item; shrinkwrap removed for signing.

On his self-titled debut, Marcus Mumford takes the songwriting skills fans of Mumford & Sons already love and ascends to new poetic highs. “Better Off High” marinates with a steady beat and minimalist melodies before exploding into an overwhelming cascade of sound, rich in beauty and pathos. “Cannibal” is a harrowing tale of a romance gone sour, for better or worse, its taste still lingering on. It’s one of Mumford’s best tracks: brutal and unsparing at its beginning before moving into a well-earned period of release. “Grace” is a rollicking good time, a song about less-than-good-times, with a gospel-infused finale. Listen for stellar guest appearances by Phoebe Bridgers, Clairo, Brandi Carlile, and Monica Martin.