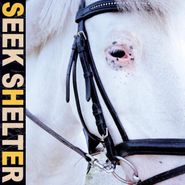 Iceage teamed up with Sonic Boom of Spacemen 3 on production and added new guitarist Casper Morilla Fernandez for their fifth studio album, Seek Shelter. "Holding Hand" features subtle tinkling sounds in the background of the band's characteristic impending-doom atmosphere, as well as distorted strings and other effects in the fiery last half of the song. "Gold City," on the other hand, has an unusual lightness to it with a few folky touches like harmonica and a melodic chorus. It's just one sign of the subtle evolution in songwriting on this new record from the dark, brooding band.