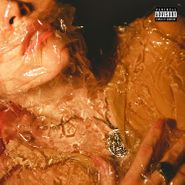 It can be hard to stand out in the vast sea of indie pop. On Saved, Now, Now's first new album in five years, they have fully eliminated their previous brief glimpses of emo and replaced them with pleasantly experimental pop. Since the departure of Jess Abbott, the group reinvented themselves into a low-fi duo where singer KC Dalager and instrumentalist Brad Hale play with dreamy vocals, stoned guitars rhythms, and electronic disorientation. Those who had their ears open a year ago would've heard the single "EGL" (short for "shotgun lover"), which felt like a glass of ice cold water on a hot day. The mellow synths, simple bass rhythm, and discreet guitar crept up on you with how beautifully constructed they were. It underplayed how creative and thoughtful their music is, especially with Dalager's whispery vocals that could almost be electronic behind all the digital fuzz and cosmic sounds. Flash forward to the present and their new release Saved, which takes the direction from "EGL" and further pushes into delicate dream pop territory. It has all the art school musical playfulness, but "Can't Help Myself" is a perfect example of how they balance it perfectly. The lyrics start to veer into their emo territory and the production starts to dip its toes in weirder directions before the song's beat drops and the gorgeous harmonies swirl together. The balance of vintage drum-machines and shoegazey guitars with Dalager's voice almost evaporating shows the risks Now, Now is taking. "Yours" has a wonky synth intro that sounds like a slowed down Spandau Ballet track, exploding with beautiful layers of sounds as the track builds and builds. Pop music this good doesn't come all the time -- especially pop music this mellow and beautiful. A real gem of an album to start the summer.