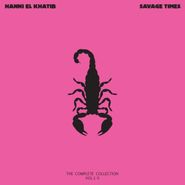 Looks like we get one a year from HEK, and if you’ve followed him, you know that he’s continuously reinventing himself with each outing, without really changing anything at all. The love for his family shines through, and the T-Rex-ish “sludge” of past songs like “Teeth” may be lightly peppered this time, but I love that Hanni is keeping up with strings.

Having proven his garage-y, neo-soul cool over his last few albums, Hanni El Khatib seems to have found a strengthened core on his new album, Savage Times, which is a collection of his five EPs released over 2016, the result of which is less downtown cool and more humorous, funky, and angry. These tracks are some of his best, both because of their playful irreverence and because of their sense of very personal rawness. Stand outs include album opener "Baby's Ok," which is a sort of Shannon and the Clams tune by way of Hasil Adkins, "Gun Clap Hero" (imagine The Clash doing Curtis Mayfield), and "Mondo and His Makeup" which belongs in a garage more than your dad's old, rusted out Camaro. But the most spine-tingling track is the two-minute "Born Brown," which is perhaps Khatib's most soul shaking, unfiltered scorcher to date.