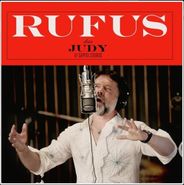 There are album releases…and then there are event album releases. This latter category is all about what’s larger-than-life: the artistry, the voice, the history, the glamour. Rufus Wainwright’s Rufus Does Judy at Capitol Studios checks all those boxes, with aplomb. It’s the album version of Rufus’ June 10, 2021 virtual tour performance at Capitol Studios in Hollywood, during which he recreated Judy Garland’s live concert recording, Judy at Carnegie Hall, in the same studio where Garland once performed, and on the very same microphone. As an added bonus, Rufus is joined by sister Martha Wainwright and Broadway star Kristin Chenoweth. This heartfelt, soulful album isn’t just iconic—with Rufus covering Judy, it’s doubly iconic.