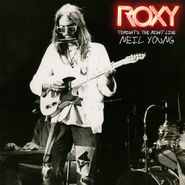 This reissue of Neil Young's live performance at The Roxy's opening in 1973 is a double LP with an etching of the club's logo on Disc 4. The live album captures Young's powerful set of songs from Tonight's The Night performed with more spirit than in their studio versions on the heavy album. Young's prevalence on the L.A. scene and the crowd's adoration enliven these songs about grief and loss, and sprinkle them with stage banter and lighthearted improvisations. It's a must-have for fans young and old alike.