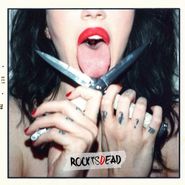 When single "Raise Hell" popped up online last year, it was hard to not get excited about DOROTHY. Headed by vocalist Dorothy Martin, DOROTHY is a fusion of divergent flavors that works perfectly: gritty, soulful vocals against screechy, vintage blues rock riffs and drums that channel modern hip-hop. They bring back the kind of loud, aggressive rock that would upset your parents. The fact "Raise Hell" ended up in so many commercials and programs is just evidence of what an addictive soundworm of a single it was. And it's refreshing to hear that their debut, ROCKISDEAD, is contrary evidence to its title: it's plain and simple rock that feels right placed next to your Led Zeppelin and Eric Clapton LPs. "Dark Knights" almost dips into noise rock with a stripped down production that has all the impact of dropping a pile of bricks on your head. The song feels like it's almost bleeding out of the mic as its pulsating rhythm doesn't give you a second to breathe and Dorothy screams at you about what kind of man is a real man and what she needs. "Wicked Ones" has foot-stomping rhythm that almost feels like an old country number filtered through a fuzz pedal. It's hard to not move or sing along when the song's beat knocks you hard against your skull. This is what rock should embody. It's good to know DOROTHY moved up from a local act to a major label atomic blast that is hopefully a sign of rock to come.