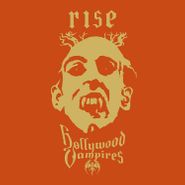 Alice Cooper, Joe Perry, and Johnny Depp serve up their second album as the Hollywood Vampires, this time with mostly original songs. Cooper is at the helm for the most part and tracks like the opening stomper, “I Want My Now,” bear his obvious stamp. Perry lends heartfelt lead vocals to the Johnny Thunders song, “You Can’t Put Your Arms Around A Memory,” and Depp impresses as the frontman for Bowie's “Heroes” and Jim Carroll's “People Who Died.” The single, “Who's Laughing Now,” is a fun, dark rocker with a chanting chorus and freewheeling guitar solos in the bridge, while “We Gotta Rise” is a bawdy drinking song mocking political rhetoric.