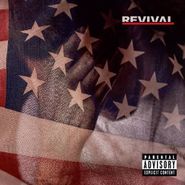 While many artists enter the MOR stage of their career happy to rest on their laurels, Eminem seems pretty determined to prove something to anyone willing to listen. Ever since 2004’s Encore and the ensuing drug addiction that nearly derailed his career, nearly all of Eminem’s subsequent releases have been billed as a “return to form” in some way another, as that desire to recapture the spark and cultural cache of his turn-of-the-millennium classics is clearly the impetus behind them. Revival marks the newest incarnation of the Eminem comeback album, as well as the third in his series of albums with R-titles (following Relapse and Recovery). He certainly doesn’t lack for ambition this time around, as the record kicks off with a ballad that features none other than universally-loved queen bae Beyonce herself. “Untouchable” is a 6-minute lead single that, much like his celebrated BET Awards freestyle lambasting Donald Trump, is unrelentingly political and filled with righteous indignation. Eminem could care less about competing with current hip-hop trends or chasing record sales; this is a clearly a man possessed by purpose. More power to him.