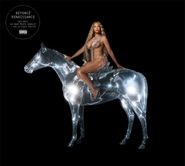 It’s here: the album event of the summer. Beyonce’s RENAISSANCE proves why the singer stays consistently at the top. It’s an innovative melange of different genres of underground Black and gay musical culture; this is an album with pop bones and freestyle, techno, disco, bounce, and new jack swing trappings. The tracks feel like they pull naturally from the past to create the sound of the future—quite literally on the Donna Summer and Giorgio Moroder-sampling “Summer Renaissance.” The inimitable Grace Jones makes a guest appearance, as do Beam and Tems. Production is handled by an ultra-talented group, including The-Dream, Syd, Symbolyc One, A. G. Cook, Honey Dijon, Beam, Tricky Stewart, Bloodpop, Skrillex, Hit-Boy, No I.D., P2J, and Nova Wav. RENAISSANCE will probably end up a Top 40 smash. It should also appeal to fans of avant-garde electro.