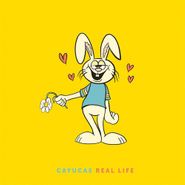 The town of Cayucos, CA, for those unfamiliar, is a sleepy beach community quite off the beaten path, sitting along the sparsely populated coastline that stretches between Big Sur and Santa Barbara. It’s not a youthful place by any means, with inhabitants seemingly as old as the town itself and the storefronts along its main strip resembling a dusty photo from the 1950s. Unsurprisingly, the feminine-noun’d Cayucas are a nostalgic lot, drawing plenty of inspiration from the town’s mystique despite their young age, as well as pulling from all California arcana in general. Purveyors of breezy collegiate pop (think Vampire Weekend by way of the Beach Boys), the band spent the last two years recording Real Life, their third studio album. In many ways, it feels like a second attempt at a first impression. Cayucas’ sound, while retaining all its telltale elements, has been tweaked considerably to include much more electronic elements, including plenty of synthesizers and programmed drums. The sunny melodies and distinct mythology of the band remain intact, and there are plenty of oblique references to, among other topics: girls known by first name only, the year 1998, and their namesake town.