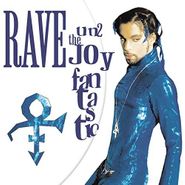 ¬Rave Un2 the Joy Fantastic is the twentieth studio album by the “Artist Formerly Known As,” issued by Arista in November of 1999 (Prince was still insisting on being addressed with an unpronounceable symbol instead of his name). It was a one-of deal with Clive Davis at Arista, meant to reinvigorate Prince’s career. Davis knows what he’s doing in this department, as he orchestrated massive career comebacks for not only Carlos Santana, but, even more improbably, Rod Stewart. The plan was hook up The Artist with a constellation of celebrity collaborators including Chuck D, Gwen Stefani, Sheryl Crow, Maceo Parker and Ani DiFranco (?). It didn’t work very well, and sales were modest.