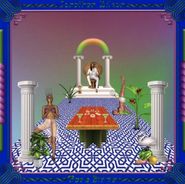 Jonathan Wilson might be better known for his production work than his solo career, being the go-to guy behind the boards for hip folkies such as Conor Oberst or Father John Misty, for whom he has produced every album. Still, he’s no slouch as a songwriter, either. Rare Birds is his third solo album and over the course of its 76 minutes it certainly doesn’t lack for ambition, albeit in its own, easygoing way. Coming across as a super-amalgam of breezy '70s rock such as Fleetwood Mac, Al Stewart, Steely Dan, and the mellower bits of Pink Floyd (a particularly apt comparison, as Wilson has also moonlit as the touring guitarist for Roger Waters) mixed with a New Age-minded ambiance and production, Rare Birds takes classic FM rock songwriting into otherworldly, dreamlike-places. Most of these tunes are simple folk tunes at their foundation, but through Wilson’s production are allowed to extend past their verses and choruses into a blissed out state where surreal synths and reverb-drenched atmospherics abound. The album even features a cameo by New Age music and meditation legend Laraaji, whose vocalizations are featured heavily on the audial equivalent of George Harrison unlocking his seventh chakra that is “Loving You.” Somewhere between the barefoot, crystal-peddling yogis of Silverlake and your dad’s record collection is a world that only Wilson understands. Rare Birds proves that it’s about time the rest of us crossed over.