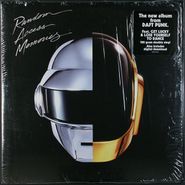 I’m really not an electronica/house (it’s really a disco, though) person, and I didn’t think I’d like it, and didn’t want to. But man, I can’t help it — it’s so good. Another happy record.

Daft Punk’s outrageous new album starts with a bang, a fanfare of funk guitars, synths and growing static noise that sounds not unlike the opening of Guns N’ Roses’ “Welcome to the Jungle.” From there Random Access Memories takes off into a nearly double-album length set of songs pairing musical heroes both new (Panda Bear) and beloved (Chic’s Nile Rodgers) to deliver something that is inspired by funk and prog-rock albums of the 1970s while retaining the musically adventurous spirit that has thus far defined Daft Punk. On the album’s best songs, Rodgers’ unmistakable riffs breathe excitement into Thomas Bangalter and Guy-Manuel de Homem-Christo’s arrangements and give purpose to their robot-rock voices — “let the music in tonight … give life back to music” they intone on “Give Life Back to Music” while Rodgers and co. make dancefloor resistance futile. One of Daft Punk’s heroes, Giorgio Moroder, appears in interview before classic Moroder oscillating synthesizers take us into vintage German discotheques in “Giorgio by Moroder.” Detractors may find Random Access Memories’ pacing questionable, as the set loses a bit of steam until a mid-album set of tracks really send the album into the stratosphere — Pharell brings hip-hop edge to “Lose Yourself to Dance” and the already indelible first single, “Get Lucky,” while “Touch,” featuring Paul Williams of “We’ve Only Just Begun” and “Rainbow Connection” fame, is one of Random Access Memories’ truest joys. Even with numerous party-starters, Random Access Memories is by no means an easy album, taking prog’s excess to heart with its long running time and more soundtrack-ish instrumental passages, but even these have a certain magic, like the beautiful digital washes of “Motherboard.” The album’s lived-in, layered feel is a remarkable achievement in an era of instant-pleasure electronic jams that Daft Punk themselves helped usher in with their dynamite early singles and albums. The wide-open, warm feel of Random Access Memories represents new ground for Daft Punk. Its singles already feel like new classics, while its expanse rewards the patient listener.