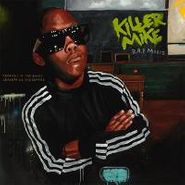 Killer Mike wins on all fronts: his beats are insane, like on the fast-paced “Go!,” calling to mind OutKast singles of yore; he raps better and faster than rappers half his age; and the quality of his rhymes is superb. Full of rhymes both personal and political (often at the same time), R.A.P. Music demands your attention, even as it delivers jam after jam.

I'm new to this Dirty South rapper's music, but I'm really impressed by his latest album. It's the toughest, funkiest slab of real rap I've heard in a while -- grimy, kickin' beats and angry lyrics that tell urban tales with real skill. Not shy about slamming recent major failures of government either. I thought real rap died and only pop club rap lives! Killer Mike is here to even the body count.