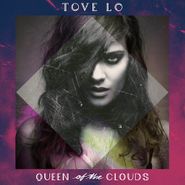 Swedish singer-songwriter Tove Nilsson, better known as Tove Lo, has been gaining momentum and mainstream attention since 2012. In her debut EP Truth Serum the pop phenomenon unabashedly admits, “I eat my dinner in my bathtub, then I go to sex clubs/Watching freaky people getting it on.” It wasn’t until that track “Habits (Stay High)” off Truth Serum was remixed by experimental hip-hop producers Hippie Sabotage that Tove Lo received international attention. Now that she has received the attention of the masses, her true confessional has begun. Much like her debut EP, Queen Of The Clouds remains brash and earnest, although it now takes on a narrative style that the full-length has afforded her. The album is split into three different segments: “The Sex,” “The Love,” and “The Pain.” “The Sex” culminates in an almost hyper-dance orgasm “Timebomb.” The climactic triumph of which is only made realistic by Tove recounting, “You’re not forever, you’re not the one.” Her playful lyricism becomes more of a self-effacing tool during her love song “Moments” where she lists all of her faults and explains, “…but on good days I’m charming as fuck.” The pain of this awareness is overshadowed by her hit single “Habits (Stay High)” which is a shockingly deep portrait of a personal relationship and the effects it had on her. The synergy between this open-book mentality and out and out club beats make this debut a lyrically dark dance charmer.