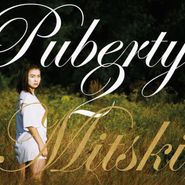 The humorously titled Puberty 2 perfectly packages what makes Mitski so great. Like her music, the title feels like an awkward joke directed at herself that is both funny and immediately too intimate, gawky, and painful. While PR and record companies have latched onto "indie" as an empty aesthetic to package and sell, Mitski's personal little chamber-rock albums are the perfect antidote. With the instrument duties split between her and producer Patrick Hyland, each track is whittled to the raw with songs using only guitars, synths, and industrial sounding drum-machines until the point of almost quiet ambiance and shoegazey reverb. But this isn't to undermine her songwriting. She perfectly embodies the navel-gazing, youth generation that found solace online with lyrics that walk the tightrope between tragedy, madness, and chuckling irony. "Your Best American Girl," her first single off the album, is probably the only time in rock that Asian-American angst is directly confronted. This ballad about lost American identity and ending a relationship because of immense cultural differences starts off quiet until it ends with guitars reminiscent of Weezer at their mid-'90s peak. "Happy" starts with a drum-machine blast right out of Suicide while her voice is gargling on white noise. But even the sad, lonely sounding track wears its emotions as clear as day as she sings in a whisper about a night of pleasure with a boy who slips out unbeknownst to her the next morning. Even a song like "A Loving Feeling" is less about the actual feeling of love, and more about how to deal with the pained feeling of having these emotions when you are alone. Though the brisk, anthem mood of the track makes you think it's more joyful than what it's actually about. Puberty 2 is a complicated bag of mixed emotions that will grab anyone with an iota of feeling. Mitski's blunt, laid out feelings combined with low-fi, spacey tracks make it as cathartic a lesson for the listener as it probably was for her to make it.