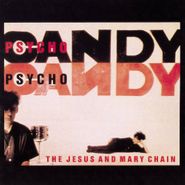 The Jesus And Mary Chain's debut album, Psychocandy, is a perfect record whose 14 tracks follow a formula of Beatles/girl group-style melodies roughed up like burnt rubber tires, smothered with cascades of guitar noise, and battered with bone-simple beats. Scottish brothers Jim and William Reid, plus Douglas Hart on bass and Primal Scream's Bobby Gillespie on drums, created something pivotal and enduring with Psychocandy, something that probably always will greatly affect people of a certain class.

“Just Like Honey” is the obvious entry point and still a hauntingly beautiful song that is universal in a Nirvana sorta way. But the album’s next few tracks are its best. “The Living End” isn’t just a song title that Gregg Araki would nick for his great movie of the same name; its overall vibe is so underground and elusive that listening always makes you feel a lot cooler than you really are. Both “The Living End” and “Taste the Floor” introduce a sonic trick that other great bands would mimic, like the aforementioned Nirvana, their inspirations in The Pixies (who themselves would cover J&MC’s “Head On”) and shoegaze followers like Lush and Swervedriver, piling added distortion on what already felt like too much to begin with. It’s overwhelming and awesome.

I used to never make it past track eight, “Never Understand,” because it was my favorite and so well-placed (right after the shocking “In a Hole” and blistering bubblegum of “Taste of Cindy”) that I would wait for it and then just stop listening to the album after that. That might not sound like a good thing, but now, years later, the album’s second half is more alluring, given that I’ve somewhat worn the first half out. “Inside Me” has the most badass riff on the album (well, one of the only riffs, but who cares). “Sowing Seeds” is essentially “Just Like Honey” pt. 2, giving the album a cyclical thing that makes it feel like you just started side A again. “My Little Underground” has one of the catchiest melodies and cadences on the album. “You Trip Me Up” is a single that gains traction over time. The album’s closers re-present both sides of J&MC: “Something Wrong’s” distortion is somehow gleaming, its melodies seem like they’re floating; “It’s So Hard” ends the album with uncompromising noise from a tin can, animalistic vocals spiraling down the drain. Like many records whose reputations precede them, it should be approached with caution and when you’re ready, not because someone told you to listen to it.