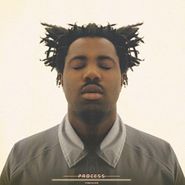 Sampha’s debut is a triple threat: a powerhouse in R&B vocal technique, left-field pop production, and lyrical unpacking of grief. This is what James Blake might sound like if he really swung for the fences, instead of relying on a misplaced sense of restraint.

South London producer/performer Sampha Sisay has one of those voices that speaks volumes. (You’ve probably heard his work on tracks by Katy B, Kanye, Solange, FKA twigs, Drake, Frank Ocean, and Jessie Ware.) On Process, his velvet tones convey a depth of feeling; one minute the listener is drowning in Sampha’s own longing, the next minute buoyed by a radical hope. The melodies are equally strong, with raw, powerful piano and barebones soul structure. This smart, heartfelt album checks all the boxes for a future classic.