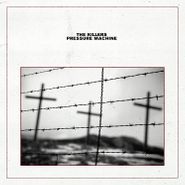 The Killers are taking their danceable, anthemic rock ’n’ roll in a whole new direction on the unexpected, exciting Pressure Machine. They’re heading into different territory sonically but it may as well be geographically—the conceit of the album is that it’s an exploration of the small town of Nehphi, Utah, where frontman Brandon Flowers spent his formative years. Thus, the band finds themselves in a dustier, grittier, Springsteenier mode, the songs conjuring up images of vast open spaces, well-trod streets and a close-knit community. The result is a heartfelt, cinematic, impactful album, with a nice turn from Phoebe Bridgers on “Runaway Horses.” Well worth a listen for existing fans and for potential new fans who dig folk rock/Americana vibes.