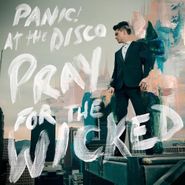 Panic! At the Disco are one of the few rock acts to survive as many changes in membership as stylistic left turns and come out not only intact, but stronger. Their last album, 2016’s Death of a Bachelor, was the first to solely feature original band member Brendon Urie, and it also happened to be their first No. 1 record. Perhaps unburdened by the past, Panic! At the Disco have evolved far from their emo-dance-punk debut on Pray for the Wicked, which embraces the sound of current radio, from stadium-folk-rock to hip hop. First single “Say Amen (Saturday Night)” is as festival-ready a single you’ll find, coasting on Urie’s deceptively complex arrangement and snaking melody into a lighter-waving chorus that pushes Urie’s vocal range into the stratosphere. On “High Hopes,” a Kanye-fied backdrop of horns and a marching band beat makes for one of the most interesting pop-rock mashups in recent history. But, as this is still the band that crashed onto the charts with a hyper, hard-to-pin-down punk-indebted sound, Pray for the Wicked is anything but safe. “(Fuck a) Silver Lining” begins the album with manic, Prince-like shouts, wildly twisted synths, and sudden drum breakdowns that sound like three separate songs imploding into one glorious post-breakup anthem. Whether Urie’s Panic! At the Disco can continue to push modern-rock radio leftward remains to be seen, but at the very least, Pray for the Wicked is a thrilling listen and a fascinating document of the anything-goes approach to pop in which we currently find ourselves.