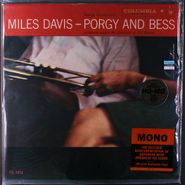 It may seem odd that this cool jazz trumpet player would cover a 1935 broadway
stage production. Originally conceived as an “American Folk Opera” by the Gershwin
brothers and based on a novel by the Hayward’s about fictitious life in South Carolina
in the 1920’s, a good number of the songs have become evergreen standards for
many a jazz player. Who could argue that songs such as “It Ain’t Necessarily So”,
and “Summertime”, will not live on forever? Both are featured on this creative and
programmatic rendition of the opera.

Miles Davis is joined here by jazz arranger and pianist Gil Evans to lay out an eccentric late-night misty version with tone-poem colored orchestrations. The collaborative team
of Miles and Gil was first heard on the 1949 album, Birth of the Cool and continued
on with Sketches of Spain and other notable releases. On this 1958 project, we hear
Miles squeezing out his relaxed, blue noir trumpet smears with Gil contributing 3rd
stream impressionistic arrangements. The album also features some fine solos by other
instrumentalists including french horn and drums.

“Miles has a beautifully deliberate – controlled yet suspenseful - rhythmic style” as
quoted in the liner notes. This is a very accurate description of his playing here and in
the late 1960’s, backed by high-speed, electro acid-funk groups colored his style quite
differently. The timbre and phrasing of Snoop Dog’s vocals can be heard as not only
an extension of miles’ playing but from jazz to hip hop as well. Miles never abandoned
his use of rhythm like the “free” players did. This is probably what sets him apart from
the extreme avant-garde and connected him to rock and fusion groups in the 1970’s
and ‘80’s. Miles Davis – Porgy and Bess is a great example of how 3rd
jazz freed itself from big band swing.