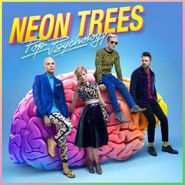 It’s fitting that Neon Trees got their big break opening for The Killers. Everyone’s favorite guilty pleasure band is now a greatest-hits act that resembles the bands that initially inspired them, leaving a vacancy in our hearts for radio-ready, sugarcoated, synth-flavored neo-new wave. Neon Trees succeed in producing just that on their third album, Pop Psychology. The glittering synthesizers, driving bassline and confetti guitars of first single “Sleeping With a Friend” are entirely irresistible as the band comes across like the next Human League. However, Pop Psychology is no nostalgia fest, as its songs deal specifically with love in the Tinder age—indeed, the crackling “Love in the 21st Century” opens the album with cynical lyrics “I don’t believe a word that you say is true/I guess it’s love in the 21st century.” “Text Me in the Morning” is kind of a sad sentiment, delivered as a peppy singalong even as its funny lyrics hide a song that’s really about disconnected love (“All the other boys just want your sex/I just want your texts” is pretty good, even if you’re too young to remember George Michael). Neon Trees aims young, but they’re also smart enough to throw a bone to older listeners that grew up either on The Strokes or New Order, with songs like the punk-inspired “Teenager in Love.” And even while Pop Psychology directly aims for radio play with its blown-up choruses, it’s also one that refuses to be anonymous, with songs like “I love You (But I Hate Your Friends)” that stick in your mind as much for their wit as their hooks. It’s tough to do what Neon Trees do so well, but that’s no reason to begrudge the band for producing guilty-pleasure pop rock that isn’t so guilty after all on Pop Psychology.