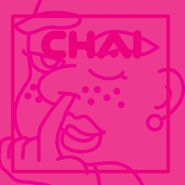 Pink isn't just an album title: it's a way of life for CHAI. Hailing from the Nagoya region of Japan, CHAI is a perfect blend of the minimal cuteness that defines J-pop with just a dose of kawaii flavor to mix things up. The songs have some funky, weird bass rhythms and shredding guitars, but their squeaky voices and cute atmosphere draws closer parallels to the cool Japan sound of the late-'90s. Technically, Pink has been out in Japan since October, but after a tour of the United States, with the high-point being a set at SXSW 2017, Burger Records broke a deal to bring their sound to the US. CHAI is the perfect band for Burger Records to introduce as they seem to be recently narrowly focused on power pop and garage. CHAI's precise funkiness and modern production makes it a real stand-out among the Burger Records library. "Sayonara Complex" is like a lost track from the famous Katamari Damacy soundtrack. It's instantly charming with its wacky bass and banging drum riff that makes it silly and light-hearted. It's the kind of fun track that's impossible to imagine an American making. It's just... refreshing! On the other side is "N.E.O.," which channels directly into early Talking Heads with a CBGB punk vibe and world music rhythm. It's frenetic and ready to disorient you with its hyperactive, sugary taste. It's a wild track filled with spacey synths and ripping guitar solos that rip through the song. And the drumming is tireless as it just seems to propel into delirium. Tired of the bloodless rock coming out of the States? CHAI's weirdness is a jolt of sonic joy!