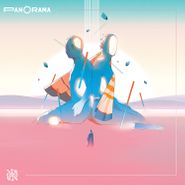 Much like its soft pink and blue-hued album cover, Panorama conveys a gentler mood and tone than would usually be expected from the veteran post-hardcore band. La Dispute’s 4th full length album certainly comes a long way from their earlier work, which imagined the abrasive halfway point between a spoken word recital and the most scream-y screamo. However, that’s not to say that the band has found any newfound positivity; song titles such as “Anxiety Panorama” and “Rhodonite and Grief,” and lyrics including passages about finding a dead body near the interstate ensure many continued years of therapy and medication. Panorama dials down the distortion for a good amount of its running time, and with Jordan Dreyer’s usually manic yelp subdued, La Dispute’s thorny demeanor has been seemingly Thorazine’d into a dreamy state of melancholy. For a genre that has experienced a surge of innovation in recent years, it comes as no surprise that Dreyer and co. have been at the heart of it, as the singer even half-jokingly coined the movement as “The Wave” nearly a decade ago. Evoking the drab atmosphere of '90s slowcore giants Codeine and OG post-rockers Slint, Panorama makes good on Dreyer’s words, taking cues from the past in crafting a futuristic and atmospheric version of post-hardcore.