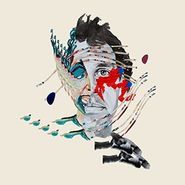 Animal Collective’s 10th studio album brims with life and color. It’s an explosion of sound, as modular synths, live percussion and the trio’s quick bursts of melodic vocals dance and blur together like a melting rainbow. Removing a lot of the reverb from previous releases allows the band’s glorious Beach Boys-esque harmonies to stand out on tracks like the electro-fried, Afro-pop-inspired “The Burglars.” Songs like “Hocus Pocus” and “Spilling Guts” return the hopscotching vocal effects of Panda Bear’s most recent album, Panda Bear Meets the Grim Reaper, while Avey Tare’s leads come through with life-affirming clarity on songs like “Golden Gal.” There’s a clearer focus on directness here, too, on songs like first single “FloriDada,” an ultimately irresistible pop song about the Sunshine State that comes off like Animal Collective’s surrealist take on “Kokomo.” Occasionally, as on that song and the “Golden Girls”-sampling “Golden Gal,” things can get a little silly. But after the relatively scattershot Centipede Hz, Painting With finds the band with renewed focus. As usual, AC evoke the feeling of staring at the desert sky without a care in the world. It’s summer forever in the world of Animal Collective.