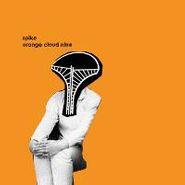 Brilliant dig from Golf Channel. Orange Cloud Nine compiles the best recordings from Spike Wolfers - a bedroom pop genius from the Netherlands who issued several holy grail private press records between 1981 and 1984. The difference between this record and most reissues is that it holds up against virtually anything released during that period. It's a clever combination of euro dub, classic rock striving and early, expansive new wave. Sometimes apes Eno's ambient triumphalism while Can You See Me sounds like a budget version of Pink Floyd's Fearless. Highly recommended.