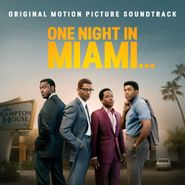 One Night In Miami features an imaginary meeting between Malcolm X, Sam Cooke, Muhammad Ali and Jim Brown in 1964, during which X inspires Cooke to write his poignant hit about civil rights, "A Change Is Gonna Come." Leslie Odom Jr.'s impressive performance as Cooke in the film is captured here on the soundtrack with that tune as well as "You Send Me," "Chain Gang," and others. Terence Blanchard's soulful compositions make up the rest of the album, apart from the lively "Howl For Me Daddy" by Keb' Mo' and New Orleans artist Tarriona "Tank" Ball, and Billy Preston's 1962 classic "Greazee."