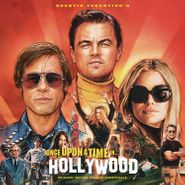 No Quentin Tarantino film release would be complete without a killer accompanying soundtrack of forgotten rock 'n roll gems, groovy R&B cuts, and choice dialogue excerpts. And while Once Upon a Time... In Hollywood definitely has Tarantino's prints all over it, it also differs from his usual soundtrack in a couple of ways. The anachronistic placement of eclectic oldies in a contemporary setting, that has become a Tarantino trademark, is in this film eradicated, as the movie itself is set in 1969, against the looming Charles Manson phenomenon, making the music contemporary to the world of the film. And this time around, the compilation of tunes is peppered with period radio ads and banter, rather than the usual snippets of dialogue from the film, giving the listener a simulated 1960s radio experience.

In a way all of this makes Once Upon a Time... In Hollywood one of Tarantino's most streamlined soundtracks, but that is not to say that it isn't just as inspired as his previous ones, or isn't even one of his best. There was plenty of low lying fruit to be picked for a soundtrack set in the late '60s, but Tarantino has mined four sides worth of mostly lesser known, deep cuts of rockin' R&B garage rock, folk, and pop, and it's all smokin'. And while there are some iconic tunes from Simon & Garfunkel, Deep Purple, Neil Diamond and Vanilla Fudge, the soundtrack truly shines with the gritty and celebratory tunes of Roy Head, Los Bravos, Box Tops and Mitch Ryder, just to name a few. And make sure to take a listen to Paul Revere & The Raiders' "Good Thing" and "Hungry," both of which were produced by Terry Melcher, famously the ex-resident of 10050 Cielo Drive who almost gave Charles Manson his record deal.