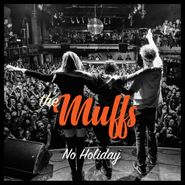 After receiving a diagnosis for ALS in 2017, The Muffs' singer/songwriter/guitarist Kim Shattuck made a vow with her two fellow bandmates to put together one final album. The world lost Shattuck on October 2nd, 2019, just mere weeks from seeing the fruit of her labors, No Holiday, get released. No Holiday is a fitting swan song, with its eighteen songs having been written over the entire course of The Muffs time as a band, while presenting all of the sonic colors and moods within the band's wheelhouse. As drummer Roy McDonald stated on an online reminiscence after Shattuck's passing, "this album is her legacy and, in many ways, our proudest moment."