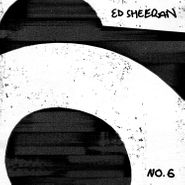 Once upon a time, Ed Sheeran made an EP called No. 5 Collaborations Project with UK rappers that he admired. Now he has returned to the concept for his new album, No. 6, which features tracks with artists as varied as Chris Stapleton, Justin Bieber, Chance The Rapper and YEBBA. The Bieber single, “I Don't Care,” is a light indie pop number that makes use of the duo's smooth vocal chops. “Blow” with Stapleton and Bruno Mars is something you might expect from Lenny Kravitz - a dynamic rock track with traces of funk and R&B. In contrast, “Best Part of Me” with YEBBA is a sweet, acoustic ballad more characteristic of Sheeran's origins and the two artists' voices twine well together.