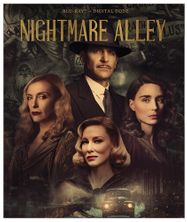 Having learned the nuances of a mentalist act during his stint as a carny, calculating drifter Stanton Carlisle (Bradley Cooper) headed for New York to establish himself as a society psychic. However, his overreach in partnering with corrupt psychologist Lilith Ritter (Cate Blanchett) in order to better fleece the big town's elite will come with a shattering price. Guillermo del Toro's stylishly foreboding redo of the 1947 noir staple also stars Rooney Mara, Toni Collette, Willem Dafoe, Richard Jenkins. 150 min. Widescreen; Soundtrack: English.