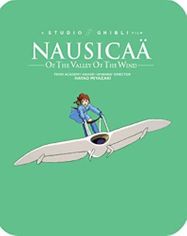 Based on his own manga updating of a Japanese folk tale, animator Hayao Miyazaki's imaginative sci-fi saga is set in a war-ravaged future Earth. When a battle between rival nations threatens to destroy a verdant valley that is home to mutant insects, one young woman-the princess warrior Nausicaä-fights to save it. With the voices of Alison Lohman, Edward James Olmos, Patrick Stewart, and Uma Thurman. AKA: "Warriors of the Wind." 118 min. Widescreen; Soundtracks: Japanese Dolby Digital stereo, English Dolby Digital stereo, French Dolby Digital stereo; Subtitles: English (SDH), French. In Japanese with English subtitles/Dubbed in English. Two-disc set.