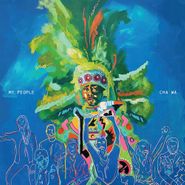 New Orleans band Cha Wa blends funk, jazz, rock, soul and more into their gumbo of sounds, but unlike your average N.O. brass band, they also celebrate the Mardi Gras Indian culture, incorporating those traditional chants into their hybrid music. This played a big part in their 2018 Grammy-nominated album Spyboy, but their new album My People finds them branching out a bit. "Wildman" is a slamming funk number with bluesy lead guitar while "My People" brings in the horns and organ with a strong '70s vibe. Another highlight is their African-influenced cover of Bob Dylan's "Masters of War (feat. Alvin Youngblood Hart)."