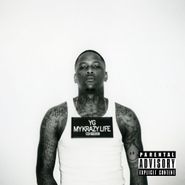 My Krazy Life announces the arrival of the next great West Coast rapper as the region continues its resurgence in hip-hop. Together with his longtime producer DJ Mustard, YG makes an incredibly likable debut that collects from the best of West Coast rap—“Really Be (Smokin and Drinkin),” featuring critic fave Kendrick Lamar, is G-funk gold. It’s full of slow-rolling beats and tweaked-out synths that YG raps hilariously, yet darkly over—“Woke up this morning, I had a boner” is a jokey opening line, but the song quickly evolves, exploring inner-city circumstances—“if I ain’t bringin’ home that money, my whole family is fucked,” he says. Just as appealing are the album’s party songs. “I Just Want to Party,” with Schoolboy Q, sneaks lyrics about the realities of gang-banging into its booty-bouncing swing, and “Left, Right” is an irresistible jammer that brings back fond memories of MTV-friendly hip-hop, a throwback to the early-to-mid aughts that’s already blown up, thanks to DJ Mustard’s danceable beat and YG’s engaging cadence. Though it isn’t as distinctive as the work of some of his contemporaries, YG’s My Krazy Life delivers on the kind of hip-hop that people have been missing for years.