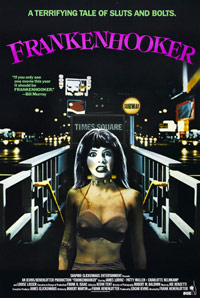 Growing up, Frank Henenlotter was always one of my filmmaking heroes and it’s not just because he made the cult classic films Basket Case and Brain Damage. It was mainly because, like me, he was originally from Long Island, New York. In fact, I recall my best friend’s mother worked with Frank’s brother at the same police precinct and for whatever strange reason, this made my friends and I feel like he was the first director that we were two steps away from rather than someone we’d imagined being in the far away land of Hollywood. It proved to us you can make movies in New York and be someone from Long Island to make them too.

So it’s funny how Frankenhooker, which would end up being my favorite of his films, was actually the last one I discovered. How I managed to go years without seeing it is completely beyond me, especially with the now legendary Bill Murray quote right on the front of the box stating “If you only see one movie this year it should be Frankenhooker.” Also, despite it’s location being set in New Jersey (in actuality, it’s Valley Stream), it’s arguably the most “Long Island” movie I’ve ever seen, at least in terms of reminding me what it was like growing up there in the late '80s/early '90s. For all of the above reasons I hold a special place in my heart for Frankenhooker.

The movie kicks off with Jeffrey Franken (James Lorinz) conducting some weird experiments on a brain with an eyeball in the middle of it; some strange creation of his own making hooked up to a TV monitor. Turns out, he’s futzing around with his newfound creature in the kitchen as his family is out barbequing and celebrating his finance’s father’s birthday out back. Here we meet his lovely fiancé Elizabeth (Patty Mullen), a beautiful blonde who gets constant pressure from her family to lose weight. She explains to one of her friends all the unsuccessful methods she’s tried in order to shed some pounds, including Jeffrey stapling her stomach, but nothing seems to satisfy her insatiable appetite. Despite actually being a trained electrician, the reason for Jeffrey’s home surgery is because he initially wanted to be a doctor before being kicked out of three medical schools for his radical ideas. One of his inventions is a remote control lawnmower that he whipped up for Elizabeth’s father’s birthday, but while carelessly demonstrating how it works, Elizabeth stands directly in front of it and falls victim to its merciless blades which send her flying across the yard… in pieces! Queue the title card and credits! Now how’s that for an opening to a movie?

After that, the story follows the traditional Universal Monster Frankenstein tale, but filtered through Frank Henenlotter’s own distinct, unique and off kilter sense of humor. Jeffrey’s completely distraught by the sudden accidental death of his beloved Elizabeth, but alas, the police are baffled when several of her body parts (including her head) turn up missing at the crime scene. Turns out, Jeffrey has devised an estrogen based fluid to preserve the body parts and he’s fairly confident that he can use the electricity from an upcoming thunderstorm to bring Elizabeth back to life. Only problem is there’s not enough of her left to bring back to life. Hence, he starts debating options on where to get spare body parts.

Being a short drive away from the heart of Manhattan, Jeffrey decides if he needs a body, he can just buy one on 42nd street! After a brief scout of New York City’s finest hookers, he arranges with the local pimp Zorro to examine several of his best girls. His plan is to find the one with the perfect body for Elizabeth and just conveniently put a batch of his own homemade “super crack” in front of her. This way he can absolve himself from the guilt or task of actually having to kill one of these girls. But when the examination happens (which is a bonkers, fun and hilarious scene), Jeffrey grows a conscience and decides he can’t go through with it. However, it’s already too late. The girls discover his batch of “super crack” and they all begin smoking it. What happens next is one of the most outlandish scenes in horror film history. The “super crack” makes the girls explode into a dozen pieces literally! But the way it's shot is in this comical fashion which looks more like mannequins being blown away by fireworks. It has to be seen to be believed.

With an array of fresh body parts surrounding him, Jeffrey thinks why settle with one great body when he can take the perfect pieces from all of them and make the perfect body for Elizabeth? He races home, puts together Elizabeth’s new form and hoists her to the roof where she’s struck by electricity. It works! Elizabeth returns, but unfortunately for Jeffrey so do the dozen personalities of the hookers that make up her new body. She knocks Jeffrey out and heads instinctively back to the streets of New York City to get back to work. From there, the lunacy and fun of the film take it to new obscene levels. Having lost Elizabeth, Jeffrey is desperately searching all over Manhattan for her. Having lost several of his top earning hookers, Zorro is hot on the tail of Jeffrey! And as for Frankenhooker herself, all the new clients she makes during the evening tend to meet a terrible end due to her electricity conducted body.

James Lorinz does a wonderful job portraying the madcap genius and obsessive Jeffrey Franken. His performance is reminiscent of Jeffrey Combs portrayal of Herbert West from Re-Animator, but also reminded me a bit of Kevin Van Hentenryck as Duane in Henenlotter’s own debut feature Basket Case. His thick Long Island accent only adds to how much I love this character who thinks he’s doing the right thing, but for all the wrong reasons. Then there’s the title character herself Elizabeth aka Frankenhooker as played by former Penthouse Playmate Patty Mullen who absolutely steals the show once she’s in her full Frankenhooker make-up. While she does a serviceable job as the sweet Elizabeth in the opening of the film, it isn’t until she’s a full blown monster where she truly shines, spouting out one-liners such as, “wanna date? Looking for some action? Need some company?” Her delivery and facial expressions as Frankenhooker are so memorable that even the original VHS box had a button you could press that would shout back the “wanna date?” line to you.

It’s a silly movie with a silly premise, but with a title like Frankenhooker, you know exactly what you’re getting yourself into and you and your friends will be rewarded by a thoroughly entertaining “cult” film. I say you and your friends, because this absolutely should be a communal experience. While the Synapse DVD may be out-of-print, there is a beautiful new Blu-ray release readily available!

Fun Fact: There are plenty of fun cameos in the movie including former East Coast horror host Zacherly The Cool Ghoul, as well as Beverly Bonner from Basket Case who always makes an appearance in all of Frank Henenlotter’s movies.