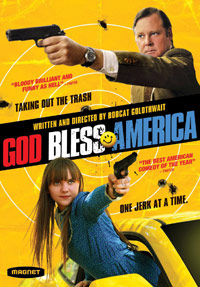 God Bless America is a satirical masterpiece, plain and simple, and it’s not surprising if you look at the trajectory of Bobcat Goldthwait’s films as a writer/director. The former stand-up comedian and star of the Police Academy sequels kicked off his filmmaking career with the often misunderstood and underrated 1991 comedy Shakes The Clown, in which he also starred, but it was his two follow-ups, Sleeping Dogs Lie and World’s Greatest Dad, that solidified him as the master of the black comedy. Those two films represent some of the darkest and most uncomfortable cinematic farces you’re bound to ever see and while he had plenty to say through the characters of those previous movies, God Bless America feels like his most personal rant on the wrongs of our current celebrity obsessed society. All the things he’d probably vent about in a modern stand-up routine are all neatly plugged into his latest feature-length film making this arguably his most personal movie to date.

Joel Murray (reuniting with Bobcat for the first time since his 1986 big-screen debut One Crazy Summer) plays Frank, a genuinely decent person who gets frustrated easily by the stupidity that constantly surrounds him. Take his completely oblivious and inconsiderate neighbors who through paper-thin walls stay up super late to loudly discuss the most asinine subjects while their unattended newborn baby cries in the background nonstop. Between the noise and his migraines, Frank can never get a good night’s sleep. So most evenings he’s plopped on his couch flipping through the channels to catch commercials for “pig fart” ringtones and power drink advertisements in between episodes of reality shows like Tuff Gurlz where one girl throws a used tampon at another girl. (No doubt, an MTV show.) But hey, that’s nothing compared to the news reports he combs through depicting kids doing violent things and then posting them on YouTube, or the angry religious fanatics protesting some social ill of the week.

To add to his daily annoyances, his neighbor always blocks his car in making it impossible for Frank to get to work on time. When he does arrives at work, he overhears his co-workers talking about last night’s episode of American Idol… errr, I mean American Superstar and laughing about how pathetic last night’s guest Steven Clark was, who gets humiliated much to the amusement of the general public live on national TV. This kicks off one of many rants Frank gives through-out the duration of the movie explaining the wrongs of modern society. In short, people these days are “just so mean. Why have a civilization if we’re no longer interested in being civilized?” He does take some solace in being nice to the receptionist at work by offering her the occasional book recommendation and sending her flowers this one time when she was having a bad day. That is, before she complains to upper management those acts to be “sexual harassment” in the work place, for which Frank gets fired even though he’s been with the company for 11 years.

To make matters worse, his daughter doesn’t want to see him for the weekend because as she puts it “your place is boring! We never do anything!” To which Frank replies, “but I take you to the park and the zoo.” “Yeah! Boring!” Oh, and last but not least, after a routine visit to his regular doctor, Frank’s informed that he has an inoperable tumor on his brain and very little time left to live; all news given to him while his doctor can’t ignore his vibrating cell phone. Yep, real classy.

Frank has been having a lot of negative thoughts. Ever since the opening of the movie, he has over-the-top daydreams of literally just blowing away all of these people who bother him. But it’s all just dark thoughts, right? With nothing left to live for, Frank is ready to end it all until he catches an episode of My Super Sweet 16 and sees the horrific spoiled monster that is Chloe, the show’s star. Between seeing Chloe on television and his 9-year old daughter calling to complain that she got a Blackberry phone instead of an iPhone, Frank has finally had enough and decides that it’s time to take out the trash.

Frank steals his neighbor's Camaro, hooks up with 16-year old Roxy (Tara Lynne Barr), a gal who witnesses the murder of Chloe and decides she wants to join Frank on his cross country quest to kill people they deem no longer deserving to live, starting with Chloe’s parents and eventually moving on up to targets such as the hateful, racist protestors seen on TV earlier in the film, TV evangelist and politic commentator Michael Fuller (Regan Burns) and the grandaddy of them all, the hosts of American Superstar, America’s number one reality television show.

Look, this movie has some pretty harsh language, excessive over-the-top gory violence and a lot of left-wing social commentary, so if you offend easily, this is definitely not for you. If you’re OK with everything I’ve mentioned above, then you’ll be treated to one of the blackest comedies and darkest satires you’ll ever see, not to mention an amazing career-topping performance from Joel Murray. Tara Lynne Barr is also pretty terrific as Frank’s faithful sidekick, the Bonnie to his Clyde, and she delivers some of the film’s best rants, in particular one on screenwriter Diablo Cody which literally had me laughing out loud, but one of the movie’s faults is probably that it’s one rant too many. In particular, Roxy has a long tangent about music and how Alice Cooper is the greatest, most influential musician of all time, something that may arguably be true but not something I’d believe a 16-year old girl in 2012 would ever say.

God Bless America was one of those movies I had to watch twice in a row. I spent my first viewing laughing my ass off during the entire film because of how close to reality the things it was making fun of were. It’s the old “it’s funny because it’s true” argument. But then on my second viewing, I found it all rather sad and depressing because… well, because it’s really close to reality and what’s wrong with general society these days. It reminded me a bit of Mike Judge’s similar satire Idiocracy which depicts a pretty dismal future with a completely dimwitted and uneducated society. The only difference is this one takes place now and none of it is all that far-fetched from what’s popular on television these days. More than anything, this only makes me more excited for whatever Bobcat chooses to make next , whether it be his gay Western Rio Malo, his horror/comedy about baby zombies Ankle Bitters or One Crazy Autumn, his sequel idea for One Crazy Summer. One way or another, I’ll be there.