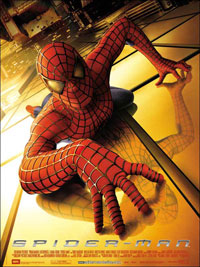 I have a confession to make. Spider-Man is the one movie I’ve seen in theaters more than any other in my life. I’m fairly certain that I caught it eight times in its original theatrical run and the first four times I saw it were all within the first 24 hours of its release. Before you declare me insane, let me explain.

Growing up, Spider-Man was my absolute favorite superhero. Never have I identified with a character as much as I did with Peter Parker; a shy, timid, smart, humble and good-hearted person who always seemed to get the short end of the stick. Then finally he’s granted this incredible power which he immediately takes for granted and that results in something terrible happening to someone near and dear to him. In other words, I learned a lot about morality and the differences between right and wrong from reading Spider-Man. All I ever wished for was a Spider-Man movie. Not surprising, there were in fact several previous attempts previous to bring Marvel’s most famous superhero to the silver screen. At one point, James Cameron, hot off of Terminator 2: Judgment Day and The Abyss, was on track to write and direct a Spider-Man movie, but with an inflating budget and a few radical changes to the source material, that version never materialized. Not too long before that, Canon Films was planning a film with Tobe Hooper at the helm (!), even going as far as creating a sales poster to help secure the financing. That version apparently would’ve sent the wallcrawler on a grand adventure in space, but alas, it never happened and that’s probably for the best.

So when the Spider-Man movie finally went into production with Sam Raimi chosen as the director, I was beyond excited. After all, Raimi was responsible for my all time favorite movie Evil Dead II: Dead By Dawn. And now the director of my favorite movie was going to direct a movie about my favorite superhero? Well count me in! I bought my ticket for opening night in advance! Then I started thinking about it and realized… what if I can’t wait until opening night? So I also bought a ticket for the first morning show on opening day. Right before the release date came, I had a friend at Sony ask if I wanted to see it a day early in a special screening in Manhattan. So of course I said yes. As I left that early screening, another friend I knew who was a manager at a local movie theater was planning to test run their print at midnight. So I went to that too and if you count those all up, that’s how I managed to see it four times in the first 24 hours of release. So did I love it?

Of course I did. In retrospect, now that it’s been about 10 years since its release, there are of course a few minor flaws here and there, but overall, it’s a pretty darned great adaptation of the Spider-Man we all knew, grew up with and loved in the comics. And it has a tremendous amount of heart to it. This version opens with some narration by Peter Parker (Tobey McGuire), explaining that like most great stories, this one was about a girl, Mary Jane Watson (Kirsten Dunst) – his crush since childhood and current classmate who barely knows he exists. The jocks pick on him relentlessly, but he does have one good friend in Harry Osborn (James Franco), a fellow student Peter helps with his studies. Harry’s father, Norman Osborn, is a rich and powerful scientist and takes an immediate liking to Peter, not only for his natural smarts, but for their similar tough upbringings, as Peter is an orphan being raised by his elderly Aunt May (Rosemary Harris) and Uncle Ben (Cliff Robertson).

One day on a school field trip to the science museum, the class is looking over scientifically enhanced “super-spiders,” a cross-breed species with the attributes of all spiders and a clever way for Raimi to fully describe all the abilities that Peter will soon inherit. One of the super-spiders escapes, bites Peter and the next morning, he wakes up with all of these newfound powers. Initially, he uses his new powers for personal gain, first to get back at school bully Flash Thompson (True Blood’s Joe Manganiello) and later to try to win some quick cash at an underground wrestling match. (This is where he’s given the name “The Amazing Spider-Man” by none other than Raimi regular Bruce Campbell!) But when the wrestling promoter stiffs Peter out of the money he rightfully earned and is robbed a few minutes later, Peter does nothing about it and lets the crook get away. The same criminal later shoots and murders Peter’s beloved Uncle Ben during his hasty robbery escape and, in turn, Peter feels completely responsible. From that day forth, he dons his Spider-Man costume and swears to never let a crime pass him by again. As his Uncle Ben told him, “with great power comes great responsibility,” and Peter found out the hard way.

Meanwhile, in fear that the government will take a military contract with Oscorp rivals Quest, Norman Osborn decides to test his not-quite-ready performance enhancer drugs on himself, which creates his split personality as the Green Goblin; in the comic books one of Spider-Man’s most vicious villains. Once the Goblin discovers Spider-Man’s secret identity, he does everything he can to hurt the hero by going after all of the people he cares about most, including his Aunt May and Mary Jane. There are a lot of wonderful nods to some of the more well-known Spider-Man/Goblin stories of the comics, but they all culminate in the showdown on the Brooklyn Bridge where Spider-Man is forced to choose between saving Mary Jane or a busload of children. While most of the Goblin appearances are somewhat campy, which is unavoidable considering the silly suit he wears, his final confrontation with Spider-Man is actually quite a brutal fight and among one of the movie's highlights. Even after defeating the Goblin, Peter has to forever live with the burden of knowing that his best friend’s father was a homicidal maniac and he can never tell Harry, who in turn wants the blood of Spider-Man. By the end of the movie, Peter says, “no matter what I do, no matter how hard I try, those I love will always be the ones to pay. This is my gift. My curse.” This is what makes Spider-Man the hero and character we all love and relate to, and I truly believe capturing the torment he always feels, as illustrated in that above quote, was pivotal to the films’ monumental success. But also director Sam Raimi should take the credit for that too.

If you’re familiar with any of Raimi’s filmography, whether it’s from Evil Dead to Darkman or A Simple Plan, you can see all of the unique filmmaking tricks he used on all those films applied here. It’s as if all those earlier films were the perfect training ground leading him up to this inevitable big-budget Hollywood blockbuster that he was always meant to make. Stylistically, there are so many things that work so well in this adaption, from the opening scene very quickly establishing Peter’s life in school and his relationships to the subtleties between Harry and his father, right down to a lot of the trademark Evil Dead-style quick edits and frantic cuts of the wrestling scene. Raimi’s sense of humor and style are totally in harmony with the original Stan Lee/Steve Ditko comic books and that’s what this first movie needed to have.

As I mentioned earlier, there are some flaws in the movie. While admirable and good in most spots, the majority of the CGI definitely doesn’t hold up as well as when it came out, especially by today’s standards, which always surprises me because you look at something like Jurassic Park from 1993 and that still manages to hold up. The decision for the design of the Green Goblin is also disappointing. While he does some of the most violent things in the movie, he looks like a Mighty Morphin’ Power Ranger villain aimed squarely at the kid audience, which is a total shame because Willem Defoe is spot-on casting for that role. Hell, you could probably just paint his face green and he’d look exactly like his comic book counterpart, or even better they could’ve just gone with this early design. Dare I mention the dated Macy Gray appearance mid-movie or the Chad Kroeger of Nickelback song during the end credits? While I’m doing some fanboy nit-picking, I might as well point out I never particularly thought Kirsten Dunst was an ideal Mary Jane; the moments with her and Peter, while sweet in some spots, are kind of… well, cheesy. But then again, it’s a movie called Spider-Man about a teenage superhero, so what do I know? Those things aside, there’s enough heart and soul throughout the entire movie to still make it a whimsical and thoroughly entertaining experience. A lot of the credit for that stands firmly on the shoulders of director Sam Raimi whose infectious love and respect of the character shines through in every frame.

Fun Fact: There are several Easter Eggs for die-hard Spidey fans all hidden within the film, but the two most prominent ones are mentions of Dr. Conners (who in the comics eventually becomes the villain The Lizard) and Eddie at the Daily Bugle who is actually Eddie Brock, the alter ego of the Spider-Man villain Venom!