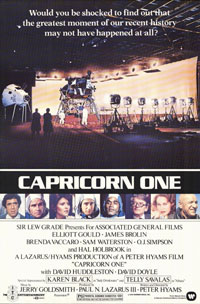 How's this for an all-star 1970s line-up? Capricorn One is a kinda sci-fi, conspiracy minded, political-thriller written and directed by Peter Hyams (Peeper, Outland and the similarly themed The Star Chamber) starring the once popular Elliott Gould as a pesky reporter (as if his Philip Marlowe from Robert Altman’s The Long Goodbye wanted to grow up to be Woodward & Bernstein). The three innocent astronauts with their lives on the line are played by the manly James Brolin (Westworld), the nerdy Sam Waterson (The Killing Fields) and ex-football star O.J. Simpson who became famous for... well you know. The astronauts wives include Brenda Vaccaro (Midnight Cowboy) and Denise Nicholas (Blackula). Hal Holbrook (Deep Throat from All The President’s Men) is the conniving government bureaucrat doing his authoritative three-piece-suit thing. Listed and boxed in the credits as special guest stars is the underrated and strangely attractive Karen Black (Five Easy Pieces) and Telly Savalas, taking a break from TV's Kojak. The rest of the cast is rounded out with other TV fixtures from the decade: Robert Walden, David Huddleston and David Doyle (Bosley from Charlie’s Angels). It’s not just the cast or the haircuts that make Capricorn One so beautifully '70s, it's the paranoia that has come to define so much of the work of the decade.

While a script about a manned rocket ride to Mars that may or may not actually happen sounds coincidentally 2012, Capricorn One is all 1978. Following on the heels of political assassinations, the Vietnam war and Nixon’s Watergate scandal, Hollywood was hot for covert government and corporate dirty work, represented with a number of conspiracy driven films as diverse as All The President’s Men, The Conversation, Winter Kills, The Parallax View, Chinatown, Executive Action and Three Days of the Condor. The '70s sci-fi genre into which Capricorn One sorta falls had similar themes with flicks like Westworld, Invasion Of The Body Snatchers and Silent Running. Of course both genres were basically driven out of business the year before Capricorn One was released when Star Wars was unleashed on the world. Along with the success of Rocky, Hollywood was becoming less interested in the cynicism of the past and now looking for heroes for the future (also ending the mega-stardom of an actor like Gould who specialized in rumpled losers.)

As three all-American astronauts, Brubaker (Brolin), Willis (Waterston) and Walker (Simpson) are about to be launched off to Mars for the first time. With their wives and the Vice President in the stands watching on, they are escorted out of the capsule and whisked away. Before anyone can answer their questions they are flown out to a desert bunker, which it turns out is also a movie soundstage. The spaceship takes off for Mars but, unbeknownst to the public, it’s empty and on auto pilot. The head of the space program, Dr. James Kelloway (Holbrook), explains to the bewildered flyboys that the program didn’t have the "right stuff" and a failure would have forced the politicians to scrap the program. So instead the guys are asked to go fake a walk on Mars in the studio on an elaborate Mars set, so the public can continue to believe in the American dream. After reentry the astronauts are to be placed back in the ship and no one will know the difference. But when the guys are hesitant to take part in a hoax, the exasperated bureaucrat also mentions that if they don’t play ball their families will be killed. The guys take part in the deception but when the ship blows up on reentry they realize that the next part of the ruse has them dying, meaning they need to escape. Though they commandeer a jet, it runs out of gas leaving them on the run in the Mojave as they are stalked through the desert by black helicopters, picking them off.

Meanwhile, a pesky reporter, Robert Caulfield (Gould), gets clued in by a disgruntled NASA employee Elliot (Walden, of TV’s Lou Grant) that something is wrong with the mission. He starts to investigate but of course his boss thinks he’s crazy (like Kolchak‘s boss on The Night Stalker, were all small time newspaper editors in the '70s mean windbags). Elliot goes missing, and by missing, I mean the Government was able to erase he ever existed, but they are less successful at knocking off Caulfield. In a very exciting scene his breaks are dislodged from his car. Even after being set up with a drug sting, he doggedly follows his leads and gets closer and closer to the truth. Eventually, with the help of a crop-dusting pilot (Savalas), he’s able to rescue the last remaining astronaut, which will obviously prove the existence of a major cover-up and surely make a lot of heads roll.

Leading up to Capricorn One, a less beloved conspiracy theory that miraculously still has legs is that the Apollo Moon landing was a fraud (as well as subsequent Moon trips), to put us over the finish line in the great space race against the Soviet Union. Capricorn One has been used as more proof that the government has been fibbing; the theory goes that Hyams, as a Hollywood director, had inside info as to how the fake Apollo expedition went down. Whole books and documentaries have been produced on the subject (many even suggest that fresh off of making 2001: A Space Odyssey, Stanley Kubrick was on the phony Moon set directing Neil Armstrong himself, as he took those famous first steps for mankind). A whole industry exists on this theory, with conventions on the subject and people selling things, but Hyams seemingly just stumbled into it.

Capricorn One has the distinction of being a Bible to the paranoid and also being an outstanding piece of pop entertainment. Unlike All The President’s Men or The Parallax View or other such films, Capricorn One isn’t heavy-duty, it’s light. It may be wrapped up in conspiracy but it doesn’t try to be plausible. If a film like Coppola’s The Conversation is depressing cold meat (though brilliantly done), Hyams' movie is buttery popcorn for the masses. That’s why I loved it as a kid and thirty years later it still holds up as a watchable treat. Who knows? Maybe there are folks out there who think the new Mars quest is a sham. Maybe a movie will be made implying such a notion. The question is will the filmmakers be as affable as Hyams and create something like Capricorn One which works as a cause célèbre for the conspiracy crowd and can still be enjoyed by people of all ages for decades to come?