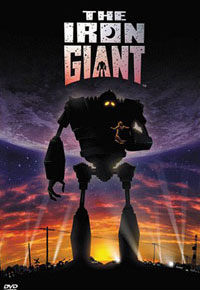 1999 was about as exciting as it gets for feature film animation with such diverse highlights as Walt Disney’s better than expected Tarzan, the jump from TV to the big screen South Park: Bigger, Longer & Uncut, Pixar’s great sequel Toy Story 2, and the American release of Hayao Miyazaki’s Japanese mind-bender Princess Mononoke. Out of nowhere came one of the most unique, stylish and moving animated flicks ever, The Iron Giant, from a Simpsons executive consultant named Bill Bird (who famously would go on to direct two of Pixar’s best, The Incredibles and Ratatouille, and then the live action Mission Impossible - Ghost Protocol).

Taking place in the chilly Cold War year of 1957, The Iron Giant works as both an allegory to America’s heightened paranoia and a stylistic tribute to the imagination those jitters created. It’s sort of a cross between The Russians Are Coming, the Russians Are Coming and E.T.: The Extra Terrestrial (with some Johnny Sokko and His Flying Robot in there too). With a theme of embracing what you don’t understand, it may sound like just another “boy and his giant robot” story, but it’s much richer than a simple pitch and it may just bring a tear to even the most cynical of viewers.

The film is apparently faithfully based on a children’s book, The Iron Man: A Children's Story in Five Nights, by the British Poet Laureate Ted Hughes, who is also known as the widowed husband of tortured poetess Sylvia Plath. Like much of Roald Dahl's work the book was written for his children, in this case, to help understand the tragic suicide of their mother. Pete Townshend of The Who wrote a staged rock opera in the '80s based on it called The Iron Man: The Musical. Atlhough the film had been in development for years, it finally became a reality when Bird got involved and hired a Walt Disney story artist, Tim McCanlies (Secondhand Lions), to write the screenplay, which explains why Townshend is credited as an executive producer.

In the sleepy, rural town of Rockwell, Maine single mom Annie Hughes (Jennifer Aniston) is stuck with an obnoxious young son unfortunately named Hogarth (Eli Marienthal) who happens upon a giant but clueless robot from outer space. The lonely kid and the clumsy tin-can become pals. This may be the most sensitive robot since C3PO (he even gets teary-eyed over a dead deer). Meanwhile an ambitious federal agent, Kent Mansley (Christopher Mahoney), is on the trail of the mechanical alien with sights set on destroying it. At first Hogarth is concerned with hiding his new friend from his Mom, but then it becomes a battle of will against Mansley. He also becomes friends with a hip beatnik named Dean McCoppin (Harry Connick, Jr.), a junkyard artist who seems better suited for Greenwich Village than upper New England, who aides him in deceiving the snooping G-Man. (And of course there seems to be chemistry between him and Annie, though she also appears to have the hots for the chisel jawed Mansley.) As expected in a story like this, only the innocent kid and the eccentric artist have the ability to appreciate the misunderstood robot, but even Dean, being an adult, is sometimes too cynical to fully trust him.

It turns out the giant robot is loaded with guns and rockets but doesn’t know it. As voiced wonderfully by baritone Vin Diesel, the robot must comes to terms with who he is and why he is here. Luckily for his conscience he and his friends come to realize he is a defensive machine; his mission, like the robot Gort in the 1951 sci-fi classic, The Day the Earth Stood Still, seems to be to use violence to stop violence - whenever he spots a gun or a tank he automatically goes into an offensive posture. At first anyone who bumps into him thinks he’s a monster (ala Frankenstein), until he rescues some children dangling from the roof of the town's square (just like the Russian sailors do in The Russians Are Coming, the Russians Are Coming). The good, wholesome people of America realize he’s a kind soul, but it all inevitably leads to a showdown with the American military who, of course, assume anything trying to bring peace is a Communist conspiracy. It comes to a very sad ending (ala E.T.), but leaves the viewer with a lot of hope by the end credits.

Bird is obviously a creator with a finger on the pulse of the past. When the robot goes all medieval on the army it’s a direct homage to the violent aliens from The War of the Worlds. The Iron Giant works on its own level but is also an artful tribute to the sci-fi sensibilities of yesteryear. Besides all the aforementioned, there are references to Invaders From Mars, It Came From Outer Space, Superman, a couple Twilight Zone episodes and '50s educational films like Duck & Cover. But it’s not just the references, other than the “single mom” all forms of sensibilities come directly from the era. Not only does the film take place in ’57, it feels like it could have been made in ’57. Like so many postmodern filmmakers who mesh up the styles and ideas that influenced them and pop out their own vision - from Scorsese to Tarantino to Truffaut and Godard - with both The Incredibles and The Iron Giant, Bird has put himself into a class of filmmakers who have redesigned the future of movies by pilfering, brilliantly, from the past.