Songs from the Second Floor 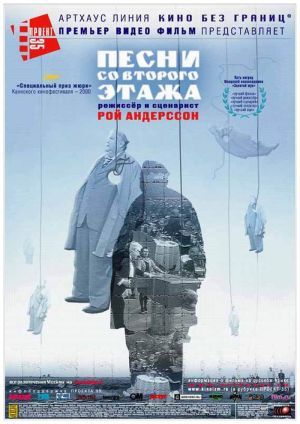 This film is one in which everyone is a spectator, being human is extremely difficult, and the viewer is given a looking-glass into the sordid lives of characters who function in a gray existence.

Many compare the film to Swedish Opera, but for me it is like a blend of performance art and visual poetry that takes everyday life and heightens your awareness of its many disappointments to the point that it is both painful and funny.

With a cast of mainly non-actors, director Roy Andersson weaves together several stories of people hanging onto their lives in vain. It is a statement on society and its various components: religion, compassion, love, family, work, and so much more. There is a wonderful sense of stillness, aided by camera placement, frugal editing, and a scarce soundtrack. There is a heavy emphasis on the little things in life: the intimate, silent, and somehow awkward moments between lovers and family, for example. There is also a sense of entrapment within the plot: traffic jams that last for eight hours with cars hardly moving; trains filled with people who don't speak or move, but oddly enough lip-synch with the operatic soundtrack.

It’s 1999 in Sweden. Hospitals are overcrowded. There are foolish love affairs between people well past their prime. A traveling magician accidentally begins sawing a man in half during an act. A former commander-in-chief turned millionaire celebrates his 100th birthday from an adult crib in a posh nursing home among generals and colleagues whom he can no longer recognize. At an expo convention a man tries to take advantage of the unrest that hits everyone from the falling stock market and the new millennium by selling oversized crucifixes. A swarm of businesspeople take to the streets in protest like zombies as they shuffle and flog each other throughout the day as some kind of bizarre penance. Men of God are unsympathetic to those in turmoil, and a child is sacrificed for the good of mankind.

In the forefront we have Kalle (Lars Nordh), a man with two grown sons, a furniture store, a wife, a mistress, debt, and guilt over his past. In an effort to battle the falling stock market he burns down his business in the hopes that he'll gather insurance money and start a new life. His oldest son went crazy from writing poetry and lives in a mental institution. His youngest looks after his brother's taxi service and his wife. Kalle spends so much time playing the victim, along with everyone else in his city, that he doesn't realize that he's the person who turned others into victims. Eventually his ways start to catch up to him. Between the guilt over what he's done and other selfish acts from his past, his grasp on reality slips. He begins seeing the dead, comprised of both a man he trampled over and others wronged across the world. They start to follow him around and talk to him which drives him to insanity and truth.

The film is shot in digital video, which aids the cold, documentary feel to its look. The soundtrack is comprised of the same short classical number and opera. The ending is perhaps the most bizarre and mesmerizing twenty minutes of a movie that I've ever encountered. The story is one that really plays on your worst nightmares. Not monsters, ghouls and that sort of nightmare, but the nightmare of having to deal with life's many obstacles while trying to figure out what your purpose is. It takes these woes and discomforts and magnifies them to horrendous proportions, and that's what made the film truly spectacular. Besides being compared to Russian Ark for its editing, I can honestly say that it is extremely daring and original. It is largely based on the poem “Stumble between two stars,” which is recited in the film (the director even dedicates the film to the poem's author, César Vallejo). Therefore, if you enjoy poetry, and/or surrealistic plots disguised by filming methods usually found in realism, I think you'll really enjoy it.