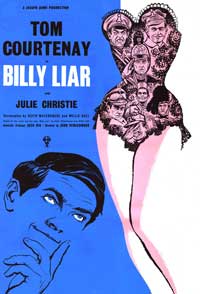 Set in the rapidly changing times of 1960s England, Billy Liar tells the story of a young man who's impervious to change and weak from imagination. Most teenagers go through a phase of deception—one in which they exaggerate their circumstances and experiences in order to get respect and acceptance from their peers. Young boys and girls brag about certain sexual encounters or invisible spouses, or some claim that generic items bought on sale were expensive. These claims at excellence are sometimes made out of boredom, but oftentimes are done just for the chance to exercise their imaginative muscles. When they reach adulthood, these traits are usually written off as juvenile and grown-up mentalities eventually set in. Our protagonist, Billy Fisher (Tom Courtenay), is one of those young adults who can't seem to make that transition.

His town accentuates his conflicting views towards change and offers a great metaphor. The majority of the people there don't change, nor do they stray from their safety zones as far as relationships and employment. Housewives wait on edge to see if someone has dedicated a song to them on the popular radio station, “Housewives’ Choice.” Young men scuffle for employment and young ladies work towards becoming their future housewives. But as these people carry on their daily routines, change invades them via demolitions of prized structures and the increase of blacks in many positions. Billy is constantly trying to play by the rules and bend them at the same time, but what he really wants to do is tear down the entire foundation and start anew.

He lives with his grandmother and his parents—a father (Wilfred Pickles) who can't stand the sight of him or the sound of his raspy voice and a mother (Mona Washbourne) who spoils him and wishes for the best. The family thinks he's far too old to be making up stories and telling white lies, not to mention waking up whenever he feels like it and being late to work as a result. They even call him “His Lordship” out of spite behind his back.

For Billy, every morning brings the false hope of obtaining the career of his dreams and finally starting his first novel. He gathers this hope by conjuring up a make-believe country in his mind, which he disappears to when life's a drag. In this country, he takes the form of several people of great importance. It's a place where a war is coming to an end against “Ambrosia,” and he shifts from being a war hero, a black soldier, a white solider, a member of the marching band, a general, and last but not least, the prime minister. Each character gives him a dazzling new perspective and a chance to be hailed as a great man. But in reality he works at a funeral parlor as an undertaker's assistant. And instead of taking the profession seriously, he butchers his responsibilities and steals petty change off the books.

Billy's newest and grandest lie comes in the form of a new job proposal in London. He's told his family, friends, neighbors, and co-workers that the TV comedian Danny Boon has read his writing and has offered him a job in London writing scripts for the series. But his glee from having people believe in his latest story is ruined by many real-life dilemmas. The first is that he's simultaneously engaged to two different girls: the sweet but prudish Barbara and the fast-talking Rita. Both girls are anxious to meet his parents and make the news of the engagement public. He even has the nerve and succeeds in using the same ring between them, claiming to take it in for alterations as an opportunity to give it to the other girl for a week or so. And since Billy can only deceive them for so long, things come to a head. The pressures from work rise as well when his boss decides to have a look at the books.

But the fresh threat for Billy is Liz (Julie Christie), an old girlfriend and kindred spirit who's just returned from France and with whom Billy is still desperately in love. She's everything he wishes he was: resourceful, brave—willing to pick up and go on a whim. She's also very pretty and hard to ignore. Eventually Billy gets reacquainted with her and she presses him on his progress, knowing that she can only expect a batch of lies. Unlike the rest of the town, she's willing to play along with Billy's imagination and offers to accompany him to London and eventually marry him. For Billy, the offer is his biggest battle. Should he have an adventure with his soul-mate or stop ignoring the throes of life that will inevitably trump his aspirations?

My favorite parts in the movie are Billy's fantasies, which are planted into each scene with jump cuts to make it appear as though they're actually happening. Most of the time he's attaching more desirable personalities to his family and himself, but he also riddles people with automatic gunfire in his mind when he's had enough of their criticism. The theme and the editing brought to mind several wonderful films, including Harold & Maude, Ma Vie en Rose, and Dillinger is Dead. The music is grandiose and adds its own comedic effect, and the cinematography underlines and highlights certain truths that one cannot ignore.  Courtenay's (The Loneliness of the Long Distance Runner, Doctor Zhivago) ability to be the fulcrum of just about every frame was very impressive, as was his ability to tap into a character that is many characters. Highly Recommended.