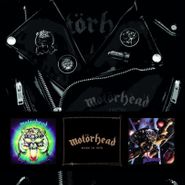 This 7LP + 2 7" singles box set celebrates the 40th anniversary of Motorhead's 1979 output: the Overkill and Bomber albums, with brand new half speed masters created from the original tapes, plus two double live albums of newly unearthed, previously unreleased concerts, an album of B-sides, outtakes, and rare tracks from 1979, and lots more.

1979 was Motörhead's year – the year of Overkill and Bomber. Motörhead, the loudest band in the world, with the power and force of a hundred pneumatic drills, destroyed the nation over and again and no-one, repeat no-one, remained unaffected by them – everyone was torn limb from limb. The albums Overkill and Bomber were ten times more powerful than their first album Motörhead, which was a killer in itself. The production was in the capable and experienced hands of one Jimmy Miller, whose previous successes had been with the likes of the Rolling Stones. He brought out the very best in the boys and the total effect was lethal. Overkill and Bomber are real skullcrackers, brain damaging to the nth degree and with the hit singles "Overkill," "No Class," and "Bomber" you can doubtless guess the destroying effect of the whole affair. That’s Motörhead, straight, basic, down to earth rock and roll, with absolutely no holds barred.