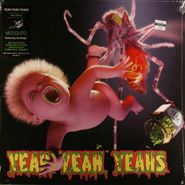 Yeah Yeah Yeahs’ sultry fourth record starts with a bang, a big soul-rocker complete with gospel choir called “Sacrilige.” From there it’s a smorgasbord as colorful as their mosquito-attacking-a-baby album cover, including moody, atmospheric sound pieces (“Subway”), Banshee-esque post-punk rockers (the title track), dubby soundscapes (“Under the Earth”), X-Files-inspired new age ballads (“These Paths”) and rockers (“Area 52”). And that’s all before you get to a dark collaboration with Dr. Octagon and James Murphy (“Buried Alive”), as well as breathtaking new entries into Yeah Yeah Yeahs’ pantheon of after prom-style bittersweet ballads in the form of the picturesque “Always,” the slow-burning, oddly uplifting “Despair” and touching “Wedding Song.” Mosquito is a very different beast from the previous YYY’s albums and takes some getting used to, for sure, but repeat listens offer new rewards (as with every album the band has produced since its debut). Its eeriness and campiness at times call to mind a Cramps record, while its hollowed-out space represents something else entirely, something new and alluring. You might miss some of their previous raucousness (or continuity), but hearing them fling new ideas to the wall to see what sticks is intriguing enough. Yeah Yeah Yeahs are one of the few bands that knows how to make its constant tinkering with its sound both interesting and entertaining. Hearing them restlessly forge new ground on Mosquito screws with your head in the best way possible. It inspires you to shake old notions of what stadium-size rock bands can and should do, and that alone is something to celebrate.