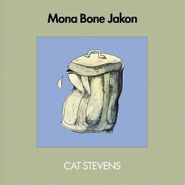 To commemorate Mona Bone Jakon's 50th anniversary comes this Super Deluxe Edition featuring a brand new 2020 Remastered version on CD, as well as in a new 2020 Mix (by David Hefti) on CD and LP, an exclusive third CD of previously unreleased demos, and a fourth CD featuring 18 live performances from 1970/71. This 50th anniversary set is rounded out with a live 12” etched vinyl E.P. of the rare audience recording of “Live At Plumpton Jazz & Blues Festival” from August, 1970, and with a Blu-Ray disc featuring the original promo video of “Lady D’Arbanville,” plus eight live TV performances, and the HD audio of the new Mona Bone Jakon 2020 Mix.