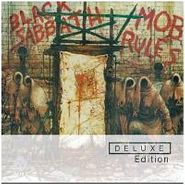 When legendary lead singer Ozzy Osbourne left the band in 1979, it looked like it was all over for heavy-metal pioneers Black Sabbath. However, the remaining members – Tony Iommi on guitar, Geezer Butler on bass, and Bill Ward drums – lucked out with the addition of two new members: Ronnie James Dio took Ozzy’s place on vocals, and they added Geoff Nicholls on keys. Dio was a known commodity from his days in Rainbow, and the group’s new sound immediately coalesced around him. Released in November of 1981, Mob Rules has some fierce, stellar performances. The title track and “Turn Up the Night” are excellent, breakneck pieces, and “Falling Off the Edge of the World” is one of the best tracks of the entire post-Ozzy period.