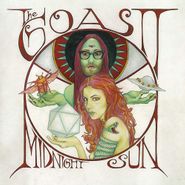 At a certain point, you just gotta say screw it, I’m going for it. That’s exactly what Sean Lennon has done with his project The Ghost of a Saber Tooth Tiger, on second album Midnight Sun. Being John Lennon and Yoko Ono’s son has earned him no shortage of fame, expectation and derision (who would even want to try making music with those kinds of preconceived notions?), so after years of solo and collaborative albums, he seems freer to do as he pleases under this moniker, with the help of his longtime romantic partner, Charlotte Kemp Muhl. Though Lennon can’t help sound like his father, and the band certainly trades in the psychedelia The Beatles helped create, The Ghost of a Saber Tooth Tiger sounds not like relics of the past, but thrillingly alive and current, more akin to Beatles followers like Tame Impala and MGMT. “Too Deep” is steeped in classic psych-rock, with tunneling blues-rock riffs, thunderous drums and Lennon singing high and ethereally above it all. “Animals” at first comes off like The Bends-era Radiohead, with strident acoustic guitars strumming in an arch arrangement, but it blows up into a bright, cabaret-esque chorus. It’s not all the Lennon show, either, as Muhl lends spirited backup vocals and takes the lead for the jaunty, experimental indie pop of “Johannesburg” and spiraling psych-rock of “Devil You Know.” Though Midnight Sun has its own carnivalesque vibe, namely on songs like the eerie “Golden Earings,” it’s also pretty great when it lets go on pretty Beatlesesque numbers like “Poor Paul Getty,” an irresistible gem that covers the sad story of J. Paul Getty III, who was kidnapped as a teen and had his ear severed. It’s equal parts festive and gritty, like many of the best Beatles songs. Indeed, Midnight Sun is an album that, however removed it is from its creator’s legacy, would make dad proud.