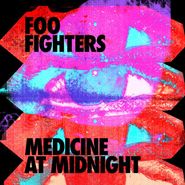 Foo Fighters' Medicine at Midnight embraces an anthemic, upbeat sound that seems directed at lifting spirits in these turbulent times. Don't be alarmed by the quirky pop arrangement and soaring "ohhh's" on "Shame Shame" -- there are still tracks like "No Son of Mine," which is an excellent blast of '90s alt-rock grit. The stripped-down, acoustic strumming of "Waiting on a War" is more typical of early 2000s Foo Fighters, highlighting Grohl's scratchy, sincere vocals. It also builds into a satisfying, rockin' outro. The band's continued enjoyment in playing rock n' roll is audible and inspiring on this, their tenth studio album.