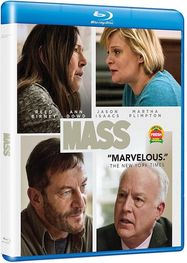 Several years after their son became one of the casualties in an Idaho school shooting, Gail (Martha Plimpton) and Jay (Jason Isaacs) pursued the only way forward that they could see-a church-brokered sit-down with Linda (Ann Dowd) and Richard (Reed Birney), the now-divorced parents of the shooter who'd taken his own life. Anger, recriminations and, perhaps, understanding memorably follow in this absorbing four-hander from writer-director Fran Kranz. 110 min. Widescreen; Soundtrack: English.