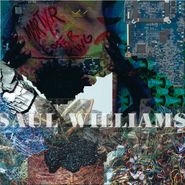 In the great tradition of Gil Scott Heron and 2Pac, Saul Williams doesn't approach lyrics lightly. He grabs you by the throat and confronts you with the ugliness and aftermath of the post-9/11 world of endless war. Williams himself personally described the album as "connecting the dots between the Arab Spring, the Civil Rights Movement and now" with a fiery and sharp delivery that slams your ears, a complete 180 from his previous dancier album, Volcanic Sunlight. The album's single, "Burundi," is angrily bitter in its furious depiction of an endlessly problematic world with economic issues, empty technological advancements, cruel treatment of young black men by authority figures, and unethical repression of entire groups of people. Warpaint's Emily Kokal supplies a strange harmonic background against the powerful track that adds a beauty to an otherwise tough song. And Williams doesn't go for feel-good positivity or easy answers. He knows that our system is rotten from the core and wants to make it clear that this tough world we live in needs to change. This is our gospel music for a world that always feels on fire; a sonic cataclysm that's something to move to and live by.